Over the past four years, we have visited some of the world's most exciting cities in my Discovered column: Paris, Rome, Rio, Hong Kong and Istanbul to name a few. So this month, we change gears and explore a tiny village of fishermen with just 1,600 inhabitants. It's called Ko Panyi. Located in the Phang Nga bay off the coast of Thailand.

On our recent trip to Thailand we followed the tracks we made several years ago, visiting the bustling city of Bangkok and the gorgeous beaches on the island of Phuket. This time we had Freddie's family in tow, so we were able to play tour guide and show them all our favourite places. (Bangkok and Phuket were two of my first articles for Connotation Press, and of course you can go back and read them again if you are hankering for another Thai escape).

On this trip we once again took a boat trip to the Phang Nga Bay with its hundreds of towering limestone stacks, narrow tunnels and sea caves all rising out of the warm green sea. The most famous of these fantastical islets is a needle shaped piece of limestone sprouting out of a quiet bay surround by another island. This was the hideout of Mr Scaramanga in the James Bond film, The Man With The Golden Gun. This is of course, a must-see on the tourist trail, and we made the visit along with a thousand others that day. Nerds from all over the world come here to stand in the bay and pretend to be holding a Walther PPK to have their pictures taken. Not far from here is Ko Panyi, and for a few extra baht, we hired a long tailed boat to take us to this fascinating village that seems to float on the water.

In 1800 a nomadic family of fisherman from Malaysia established themselves in the Phang Nga Bay. During this time land ownership was reserved solely for people of Thai national origins, so these fisherman made due by building their village on stilts within the protection of the island's bay. This provided easy access to the fruits of the sea, and the village prospered by selling its catch to the mainlanders. With the increase in wealth, they were able to purchase the small piece of usable land on the island and built a fresh water well and a mosque. In the 1980's the local postman proposed to invite tourists to the village and it has since become a regular stop for those in search of an unusual place to have lunch.

Today the island supports 360 families through a combination of fishing, tourism and a handful of seafood restaurants. The focal point and meeting place for these Muslim families is their mosque. Despite their very insular existence they seem happy to see visitors, and have set up market stalls providing souvenirs and sun cream. But even with the rise in tourism, life on Ko Panyi is still primarily based on fishing as the bay is only visited during the dry season. The village has a school that is attended by both boys and girls, and they have even built their own floating soccer pitch from scraps of wood and old fishing rafts. In 2011 the Ko Panyi Football Club had the most wins in Thailand and inspired a film that tells the team's incredible story.

It only takes an hour or so to walk around the village. In the heat of the day the old folks were taking their naps, and a group of cheeky little boys were racing around the narrow walkways causing mayhem. Fishermen were straightening their nets and women were laying out the catch of the day to be air dried in the sun. Admittedly there is not much to do here on Ko Panyi. We were happy with our brief glimpse into their way of life and had a fantastic lunch at one of the restaurants.  But there is something about this place that sticks in the mind. The modern world has exploded across all corners of the Earth, but has somehow left a few places to their own simple existence. Thankfully Ko Panyi is one of them. 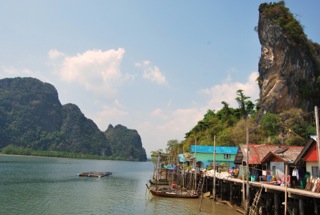