The Many Faces of Silence:
A Deaf Writer’s Response to Deaf Republic

There is not usually a chance to read a book that features beautifully illustrated signs on its pages and a deaf character/deafness itself so central to the story. Though these are by far not the only qualities that make Deaf Republic a truly groundbreaking work of poetry that everyone in this day and age should read, I noticed these aspects first because I’m a writer who gradually went deaf while embracing ASL as my second language during my teens.

I had been waiting for Deaf Republic to come out since I saw Ilya Kaminsky read a poem from this collection at the AWP conference in Boston way back in 2013. I focused on the hearing aid in his ear while he read aloud in such an animated way as I read a paper copy of the text in my hands. I saw him as someone like me—someone hard-of-hearing or deaf who also seemed to love voicing his work to an audience just as much as I did. I didn’t yet understand the scope of what Kaminsky was trying to do with Deaf Republic. His reading was just a taste, but it prompted me to immediately devour his 2004 collection, Dancing in Odessa, which is still one of my favorite books of poetry that I own. I knew he would take great care with Deaf Republic, and I wasn’t disappointed.

Upon opening Deaf Republic, I immediately flipped through it, saw the hands on the pages, and read all of the pictures first:

These signs are not straight ASL but, as Kaminsky explains, signs “derived from various traditions (Russian, Ukrainian, Belarusian, American Sign Language, etc).” Kaminsky writes about a deaf boy being shot in a town controlled by soldiers. The town rises up in solidarity and defiance by creating their own signed language and henceforth refusing to speak. This story felt both tragically beautiful and believable to me from the start. It reminded me of the island of Martha’s Vineyard where, due to the once high deaf population, both hearing and deaf people used Martha’s Vineyard Sign Language from the early 1700’s until so many people moved to the mainland that the language itself became extinct in 1952. Sign languages all over the world are each heavily influenced by their individual cultures and people. There are signed accents and differences in ASL from one American city to another. It was refreshing to see Kaminsky’s treatment of his fictional signed language done so accurately. Many descriptions of the townspeople sitting on their hands to hide their use of sign language or signing in secret reminded me of the effects of Oralism in public and deaf schools. In America from the late 1800s until the 1960’s, deaf students were beaten and forced to literally sit on their hands if they used ASL.

Nowadays, every other hearing person I meet tells me they wish they knew sign language or they used to know a little, etc. Sign language has become trendy, but as Deaf Republic exemplifies, oppression isn’t something we humans can forget so easily. It spreads under our skin, training us to be wary, to hide, to look upon strangers and wonder—how will this person react if I choose not to speak—or if I speak with my hands?


Sometimes, when I tell strangers I am deaf, they look embarrassed and then run away. If you speak, people don’t expect you to be deaf.

I once tried to stop voicing altogether, like the people of Kaminsky’s Vasenka, and only used sign language, but it didn’t catch. Hearing family members and friends around me divided. Some accepted it and others didn’t. Some learned ASL and others didn’t.

What did that mean about them?

What did it mean about me, that I decided to speak again, that I stopped embracing silence and using only my hands?

Within the notes at the end of Deaf Republic, Kaminsky states: “The deaf don’t believe in silence. Silence is the invention of the hearing.” It’s an obvious sentiment. Of course, people who are deaf since birth don’t have a true concept of silence because their version of sound is visual, like the end line of the poem “Gunshot”:

“The sound we do not hear lifts the gulls off the water.”

When you are deaf, you see sounds through their aftereffects, but for me, I was born hearing. My world gradually hushed and distorted. Sound once hovered around my ears, and then it drifted off like gulls.

The only reason I know silence is because I used to hear.


As I read the lines of written text between the hands in Deaf Republic, I gravitated towards the way Kaminsky dealt with silence. It became, like the deaf boy Petya and the characters of Sonya, Alfonso, and Momma Galya, a symbol of something deep that connected everyone and was beyond everyone at the same time. In one of my favorite poems, “What We Cannot Hear,” silence is “a soul’s noise” and “the voice we cannot hear—is the clearest voice.” As I’ve grown into my own deafness, I’ve embraced silence like this, too.

But not everyone who becomes acquainted with silence embraces it. For years, I didn’t. I filled the growing silence around me with the noise of my own voice. I read my poetry aloud to my dog who lay against my legs—silent as a dream without a single squirrel chase. “Silence like a dog sniffs the windowpanes between us,” Kaminsky tells us.

I followed the word silence throughout Deaf Republic like a dog sniffing, because silence has always had many faces for me, too.

I resonated with the character of Sonya because she was a woman “who speaks against silence, knowing silence moves us to speak.” When she was arrested and soldiers lined up with rifles to shoot her, “out of this silence comes her voice, Ready!” There are so many scenes like this—so many faces of resistance in these pages. It’s in the townspeople’s hands, their signs, their hope, their anger. In a world rift with climate change, misplaced soldiers, and puppet leaders, we should all be so angry. We should read these poems and embrace their defiance.

It’s often a slow burn, a brewing, a rising storm, and whether we scream with our hands or our voices shouldn’t matter.

In the end, as Kaminsky says, “we are sitting in the audience, still. Silence, like the bullet that’s missed us, spins—”

These poems are a warning, aren’t they? 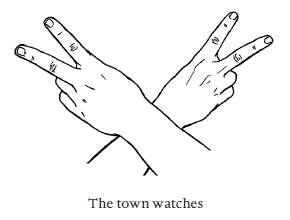 One of the signs in the book, “the town watches,” was perfectly put together for me because it takes the handshapes of the ASL sign “to watch” and it crosses them, as if blending this sign with the ASL signs for both “safe” and “love.”


It is safe to watch, isn’t it?
In this space of watching, we can also love.
But how long do we get to watch?
How long can we remain bystanders?

Consider, for example, the line “Don’t be afraid, a child signs to a tree, a door,” which insinuates that even the houses themselves and the trees understood the oppression around them, that maybe like this child, we should be talking to the trees, we should be taking better care of our houses. Instead we humans take up our rifles so easily, we take control of this world with guns and with bullets because deep down, we are confused. Kaminsky suggests: “On earth we can do/—can’t we?—/what we want,” but in doing whatever we want, there are soldiers, there are people divided, there are people hiding, there are bombardments.

From the last line of Act One—“What is silence? Something of the sky in us” to the last line of the book—“How bright is the sky (forgive me) how bright”—Kaminsky suggests we humans, whether we are deaf or hearing, townspeople or soldiers, should be asking forgiveness for the things we have done to each other, to the earth. We should be closer to the sky—closer to its brightness, its beauty.

We should listen to the silence.

Because everything that happens to this fictional town of Vasenka in Deaf Republic has happened already. It’s not new. Kaminsky has told us a very old story of violence, of resistance, of war and peace, of the many faces of silence, this “soul’s noise” that should move us to speak.

When I say “speak,” I mean with our hands or our voices or our bodies.

When I say “speak,” I mean we should scream, like Sonya, Ready!

We should ask ourselves as Kaminsky does—

Kristen Ringman is a deaf writer, wanderer, and artist. Her multi-cultural, lyrical fiction plays along the boundaries of magical realism, fantasy, and horror. She is the author of two Lambda literary finalist books: I Stole You: Stories from the Faeand Makara: a novel. Her poetry can be found in Callisto: A Queer Fiction Journal, QDA: A Queer Disability Anthology,and many other places. She is also the editor of Everyday Haiku: an anthology and has an MFA from Goddard College. Her website can be found here.