From Plate to Palate, with Amanda McGuire: December 2010 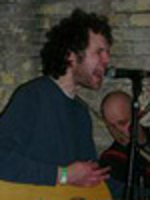 Cal Freeman was born and raised in West Detroit. He received his BA in Literature from University of Detroit Mercy and his MFA in poetry writing from Bowling Green State University. In 2004 Terrance Hayes selected him for the Devine Poetry Fellowship. His poems have appeared in such journals as Nimrod, Ninth Letter, Folio, Commonweal, The Journal, Drunken Boat, among others. He currently lives in Dearborn, MI with his wife, Sarah, and his stepson, Ethan. He teaches poetry and creative writing at University of Detroit Mercy.
----------

Christmas Cookies and an Easter Bird by Cal Freeman

Benny had been eating the Christmas cookies for weeks before my wife figured it out.  They were plain brown sugar cookies, unvarying in their Christmas tree shape, stacked in pyramid fashion upon a Waechtersbach serving platter.  The platter had come from my grandmother.  She’d buy my sister and me a piece of Waechtersbach china for Christmas every year when we were kids.  I had a whole set of the stuff and then some.  I remember complaining about these gifts and being told that I’d come to appreciate such a fine collection of red and green Christmas china one day, but it wasn’t true.  I was, however, happy that Sarah found a piece of it sufficient for displaying these cookies.  Our Jack Russel Terrier, though cunning enough not to articulate it, was pleased with this too.
Benny is a model citizen when he knows he’s being watched.  But if he thinks he is on his own, he forgets his training and climbs the high top chairs to run his nose along the surface of the dining room table, or naps on one of the couches on the main floor of our house.  Once Sarah watched him methodically glance into our bedroom, peek through the doorway to our office, check my stepson’s bedroom, then, satisfied no one was around, climb into the armchair in our living room.  He failed to look at the couch near the window though, where my wife lay reading a book.  When she shouted for him to get his ass down, he walked slowly toward the kitchen, his cropped white tail tucked between his legs.
It’s common knowledge that dogs cannot reason, this gift being granted to humans alone by the Lord on high, but Benny not only reasons, he talks as well.  Although I’ve never heard his voice, this is only because his criminal mind knows there would be no gain in speaking.  We always question what he may have done wrong when we see that little tail tucked and that slinking gait, and he always exercises his Fifth Amendment rights.  “What kind of mischief did you get into, Benny?”  my wife will ask, and you can see his mind gnawing over the text, “No person shall be held to answer for a capital, or otherwise infamous crime, unless on a presentment or indictment of a Grand Jury, except in cases arising in the land or naval forces, or in the Militia, when in actual service in time of War or public danger,” substituting the word “dog” for “person” of course.  Being other than a naval officer or soldier, he knows he doesn’t need to answer for the teeth marks in the vinyl siding, the sandwich wrappers torn to scraps on the kitchen floor, the countless other offenses he has concealed through wit and subterfuge.
December 2005 was the first month we had him.  My wife, even before she knew about him pilfering the cookies, was convinced he was bad because we had to visit the “Oops Station” to clean up after him at Petsmart and had found a dead squirrel as well as a dead rabbit on the ground in our backyard.  It would be one thing if he was a puppy, she reasoned, but the fact that he was four when we got him didn’t bode well for reformation.
The week after Christmas, while packing our holiday decorations into their bins, she noticed that a number of the cookies along the bottom row of her pyramid had been half eaten then strategically nosed back into place.  “That damn dog,” she said, because there was a flaw beneath the shape, unsanitary slavering over holiday decorations that seemed antithetical to the Christmas spirit.  In Sarah’s mind, the thief may as well have been gnawing on my dead grandmother’s femur like a rawhide.
Winter lapsed into early spring.  Benny’s fascination with hunting squirrels extended to the many songbirds returning from their wintering places.  For Easter that year my wife’s parents thought it would be cute to get the dog a spring golf shirt.  We hosted the family Easter celebration.  We had Sarah’s parents, an aunt and uncle, all of our respective siblings, as well as her aunt and uncle’s dog, Casper.  Casper is a white poodle mix that stands on his hind legs and crosses his forepaws to beg for food.  Sarah’s aunt calls this trick, “Praying.”
At Easter that year Benny didn’t pray.  He waited until people were in the living room enjoying cocktails and hopped up on the table to eat whatever meat he could glean from our honey-baked ham before my wife’s uncle came through and caught him.  He was so scared when this uncle discovered him that he pissed all over his new Easter shirt.  We punished Benny by sending him into the yard.  Sarah’s aunt and uncle congratulated themselves on having such a well-mannered pet in Casper.  While in the yard, Benny killed a robin whose mother was perched on a telephone wire, watching its first clumsy attempts at flight.  My mother in law looked on in horror as he snuck up on the little bird, grabbed it with his teeth and shook its dead body.  The robin red breast is Michigan’s official state bird.  It wasn’t his first or last felony.